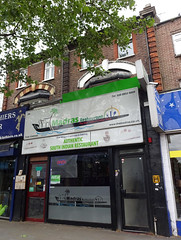 South Indian restaurant in Lewisham, part of a small chain that also has branches in Manor Park and Barking. They also do some Sri Lankan food.

Kake, secretlondon, her welshness, bob, and James visited on a Friday evening in October 2008. We hadn't booked, but they happily pushed together a couple of tables for us. They also didn't mind us ordering just starters while we waited for bob to arrive. They gave us the choice of having our food mild, medium, or hot; we chose medium, which turned out to be a good compromise for the different levels of chilli tolerance within our group.

We began with a few orders of Sri Lankan starters; masala vadai (deep-fried lentil cakes) and mutton roll (deep-fried mutton and potato croquettes). These were fine, with the mutton rolls possibly having the edge over the ones we tried at Jaffna House a few days earlier.

We left ordering the mains to bob, who chose chicken 65 (a dry, spicy chicken dish), mutton kothurotti (aka mutton kotthu; chopped flatbread with scrambled egg and mutton) photo, squid curry photo, bombay aloo, brinjal bhaji, bindi bhaji, and plain rice. Unlike the one at Jaffna House, the kothurotti came with a side portion of curry sauce. Sadly, they had no string hoppers on the menu.

We also had a couple of bottles of house wine between us, and finished with a dessert made from cooked semolina cut into cubes photo.

It was all quite tasty. We ended up paying £20/head including drinks and service, quite a decent price for what we got. According to the Chowhound thread linked below, they also have "really cheap" lunch deals between 11am and 5pm.

Service was fine; one of our waiters was fairly tactiturn but there was another chap (perhaps the manager?) who was very friendly and enthusiastic to the point of giving bob a huge hug when he said he'd have asked for the food hotter had he not been with the rest of us. Amusingly, they seemed quite perturbed at us only ordering one bottle of wine to start with, worrying that it wouldn't be enough to go around. There was one slight down note in that despite asking twice for a jug of tap water, we only managed to elicit a single glassful, but this seemed to be disorganisation rather than deliberate policy.