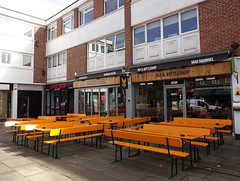 Bar and off-licence in Amersham, run by the Mad Squirrel brewery. There's another smaller branch in nearby Chesham.

This one is quite large, being located in a pair of shop units now knocked into one. Floor-to-ceiling windows at the front let in a reasonable amount of light, and the blonde wood and pale-grey walls add to the feeling of spaciousness. There's also a fair amount of standing space, and lots more bench-style seating on a patio out the front.

The bar is in a corner at the back of the right-hand unit, with keg and cask outlets in the wall behind — an electronic display above photo as of Oct 2017 lists all the current draught beers and ciders. Opposite this, a eight-storey shelf unit holds bottles and cans for sale, brewed both by Mad Squirrel and by others.

Kake visited on a Thursday afternoon in October 2017. There were half a dozen other customers in when I arrived a little after 3pm, and a few more in and out while I was there. Music was playing, relatively interesting, not too loud. Service was OK, but not particularly welcoming.

Mad Squirrel Mister Squirrel (£1.50/half) and Mad Squirrel London Porter (£1.80/half) were both in good condition, though served a little colder than ideal.

They do food all day, consisting of pizzas and freshly cooked pretzels, all baked in the open kitchen at the back of the left-hand unit.

Accessibility: A very small step to get in. Another step or two to get between the two halves of the space. No steps to the accessible toilet, which doubles as the ladies', and on out October 2017 visit there was a portable ramp in there which presumably could be brought out to give step-free access between the two sides of the bar.