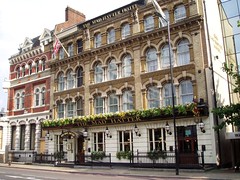 Fuller's Ale & Pie house (and hotel) south of the river near [Blackfriars Bridge]?.

Inside it's a very large space, with several hefty tables along the front of the building, and in booths along the side opposite the bar (each of which would seat 4-6 people easily), as well as another extensive room to the rear of the bar.

Beers available are London Pride, ESB, Discovery and Chiswick, as well as seasonals (London Porter on one visit, Jack Frost during winter). The pints are decent, and well-kept.

bob first visited on a Thursday evening in June 2008 at about 10pm; there was only a smattering of customers. bob, Kake, and several others visited again on a Thursday evening in November 2008, but this time the place was packed. They were having a Victorian theme evening: there were singing Pearly Kings and Queens (and one Prince) from Newham, Highgate, Finsbury, Crystal Palace, and other places. The staff were all dressed up too. They also put on a Victorian food menu, and brought samples of it around for people to try. On a Thursday evening in October 2013, it was packed at 6pm but emptied out during the evening.

According to their website as of November 2013, food is served noon-10pm every day.

Ewan sampled the menu in February 2009. The pie selection was fairly extensive, including two vegetarian options (one with black eyed beans), so Ewan went for the sweet potato, spinach & leek pie (£8.75). It came fully encased in crust on a plate including winter vegetables, and a creamy mash (an option was given when ordering to have mash, new potatoes, or chips). Gravy came in a bowl on the side. In all, a very reasonable pie indeed, tasty and filling.

In October 2013, Kake tried the "infamous" fish and chip buttie with mushy peas (£6) photo. It was OK, though too stodgy for me and I only managed half of it. The fishfingers were too greasy, which just tipped it over the edge.