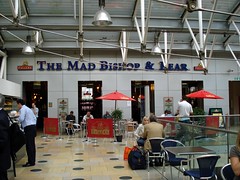 A decent Fuller's pub in Paddington Station (and hence handy for Circle Line pub crawls), and rather better than the standard for railway station pubs, reflected in the fact that it has spent a few years in the Good Beer Guide.

The pub is located on the top level of "The Lawn", the small shopping area adjoining the station platforms and booking hall. Decor aims for the traditional pub look, with plenty of wooden panelling and frosted glass partitions, despite the modern building it's in. There is seating inside on several levels, as well as seats at the front, overlooking the escalators down to the station. However, as there's no outdoors area, it can get rather stuffy and warm inside during summer, despite the presence of small fan units. It's notable that some of the lightbulbs illuminating the rear area of the pub are so hot that they've melted the picture frames they're mounted above.

There are eight handpulls on the lengthy bar to be found along the rear wall, four on either end, dispensing London Pride, Chiswick, Discovery, ESB, as well as St Austell Tribute on a June 2009 visit. Beer is well-kept, and is joined by draught lagers such as Honey Dew, San Miguel, Peroni and Grolsch, as well as Aspall's cider.

Breakfast is served from opening until 11am, normal pub food at other times. All are standard pub food options photo of menu in June 2009, and all come in perfectly decent sized portions. There's a small dessert section including sundaes (which promise cream, ice-cream and crushed smarties, though Ewan didn't notice any of the latter on his, £4.25).

Accessibility: There are lifts to the pub, and although the toilets are up some additional steps, there's another lift provided for people with disabilities.