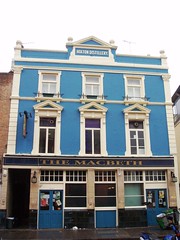 A bar and music venue in Hoxton.

The location is an old Victorian pub building, but this has been transformed into a bar very much of a piece with the area's now trendy young arty inhabitants. Outside it still boasts one former name ("Hoxton Distillery") and inside there is some old Victorian tiling depicting scenes from the Shakespeare play it takes its current name from, but little else remains.

There's a small lobby before you enter the bar proper, where the cover charge is levied (there are bands on most evenings), so this isn't a place to just stop by for a drink. Inside, a reasonable stage has been built near the back of the pub, and there's another bar upstairs with a roof terrace. There's some seating along the wall opposite the bar (creating a bit of a bottleneck for getting towards the stage area), and there's a pool table at the front of the room by the street, away from where the bands play.

The bar itself has a few draught taps, dispensing Heineken, Amstel (£3.30/pint) and Guinness, but little else. There are no ales, and bottles stretch to Corona, Budvar and some ciders.

It's a pleasant enough ambience inside, depending on who's playing of course.

You'll have to squeeze past the music fans to get to the gents toilets, as these are located just by the stage.