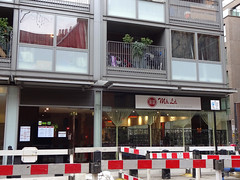 Located at the base of a new-build block with flats above, the interior is as modern as the frontage. Seating is a mix of comfortably-padded chairs and banquettes, and tables range in size from small two-person ones to large round ones that can fit parties of a dozen. Geometrically-patterned screens contrast with natural bamboo, and a mirror at the far end adds to the feeling of spaciousness.

Kake, Laura, bob, Martin, and several others visited on a Monday evening in January 2019. There were twelve of us, so we'd booked in advance, and were seated at their largest table.

Black cloud ear fungus (爽口木耳; £5.50) and spicy pig's ear in Sichuan oil (红油耳片; £8) were both good; the black fungus and pig's ear were cooked to just the right consistency, and the dressings were well-flavoured and well-balanced.

Ma po tofu (麻婆豆腐; £9.50) used fairly soft tofu, though this worked well against the firmer pieces of minced pork. The flavour was a little lacking in depth, perhaps due to using a sweeter, less funky brand of chilli bean paste (豆瓣酱) than Kake would have chosen, but overall it was a decent rendition.

Ants climbing up a tree (螞蟻上樹; £8.50) was disappointing; soupy and bland, and with very little pork mince.

Dongpo pork (東坡肘子; £14.50) was made with pig knuckle, initially presented to us whole and then removed to be cut up into portions. The meat was very tender and flavourful, but the sauce was a little too sweet.

Dry wok sliced lotus root (干鍋藕片; £11) was deliciously savoury, and the lotus root and celery were both cooked just right to have a good crunch without being undercooked.

Sliced sea bass fillet with pickled mustard greens and chilli (酸菜鱸魚; £30) was Kake's favourite dish of the meal. The fish was beautifully soft, the glass noodles were perfectly cooked, and the broth had an amazingly deep flavour from both fish stock and the pickled mustard greens, with just the right amount of saltiness. Others in the party found it too fishy, though.

Red braised aubergine (紅燒茄子; £9) and fish-fragrant aubergine (魚香茄子; £9) both had a very good texture to the aubergine, soft without disintegrating, but the sauces were merely OK. The red braised sauce was somewhat bland, while the fish-fragrant sauce was a little sweet and suffered from the same lack of depth as the ma po tofu.

Service was welcoming and helpful, though perhaps with a tendency to pour more wine than people really wanted. Worth noting is that the table setup was rather awkward, with a lazy susan so small in comparison to the width of the table that those of us with shorter arms were unable to reach the food without standing up. A 12.5% service charge was auto-added to the bill.

Kake's verdict: I'd come back if I was in the area, but probably not with a large group and I wouldn't travel far for it.

Accessibility: No steps to get in, and step-free through to the toilets, including an accessible one.