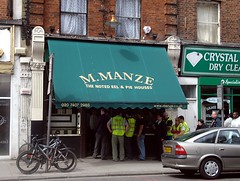 Order at the counter as you go in, and your food will be dished out in front of you; you then take it to a table yourself, collecting cutlery from the end of the counter on the way. Bottles of vinegar and chilli vinegar are available on the tables.

The menu is simple: pie, mash, stewed eels, jellied eels, and liquor or gravy. Vegetarian pies are available, but there's a 10-minute wait while they heat one up. According to the Manze's website, the vegetarian pies, the mash, and the liquor are all suitable for vegans.

It's not particularly exciting food, but it's plentiful (intended to stoke one for a hard afternoon unloading ships) and cheap; this photo shows "one pie one mash", which was only £2.70, and more than Kake could finish. The mash was a bit disappointing; bob claims this was probably due to lack of butter, but Kake suspects over-processing (they mash it by machine). It was certainly very smooth; Firedrake was surprised to learn it was made from real potatoes rather than a packet.

When Kake and friends visited on a Friday afternoon in April 2008, we got served almost immediately at 12:30pm but when we left around 1pm the queue had become fairly enormous (though reasonably fast-moving).

There are other branches in Peckham and in Sutton.

secretlondon visited at 1.30 on a Friday lunchtime in October 2008. I had to wait 10 mins to be served but there was still plenty of seating left inside. The queue outside was some way down Tower Bridge Road. I had one pie, one mash and liquor photo with a portion of jellied eels photo. This came to £5.40. The eels were available hot and stewed or cold and jellied. They also do glasses of sarsaparilla.

They do takeaways and will deliver from their website (but with several days notice as more of a mail order thing).