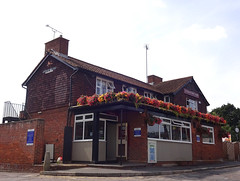 From the outside this has something of the look of an estate pub, though it's rather smarter inside. The decor is a somewhat incoherent mix of patterns and styles, and feels very much "identikit chain pub", though all looks clean and well cared for. There's a pool table, a dart board, and a part-covered patio garden out the back.

Kake and Pippa visited on a Tuesday afternoon in August 2016. There were quite a few people in when we arrived around 4:15pm. No music was playing, but sports commentary was playing on the flatscreens with the sound on.

The handpumps on the bar were badged for Greene King IPA and Abbot Ale. A pint of lime and soda was £1, and a pint of Strongbow was £3.80.

They have free WiFi via The Cloud, which requires (free) registration but doesn't seem to mind the use of throwaway email addresses.

Accessibility: Two fairly widely separated steps and then a narrow, tight turn to get in. Some of the seating is on a dais, but there's plenty on the level. No steps to toilets.