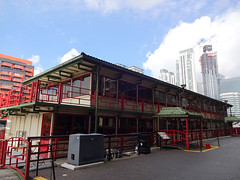 Chinese restaurant located on a boat moored in Millwall Inner Dock on the Isle of Dogs.

As of September 2008, dim sum is served every day between noon and 5pm. Kake, Leon, and friends visited to try it out on a Thursday lunchtime in September 2008. Only half of the lower deck was open, so we had to wait a couple of minutes while they set up one of the larger tables for us - though when we mentioned that we were in a bit of a rush they let us have a dim sum ordering sheet so we could get on with choosing while sitting in the lobby.

Prices are cheaper than most dim sum places we've been; most of the things we ordered were only £2, and the most expensive was £2.50. Despite these cheap prices, the quality was generally fine, and they didn't skimp on quantity either. The five of us had a total of twelve items between us. Har gao were fine, as was the steamed glutinous rice in lotus leaves. People seemed happy with the char siu bao. Turnip paste was OK but nothing special. The Lotus cheung fun selection was a little odd - the wrappers were fine, but one of them was filled with what appeared to be low-grade sausagemeat. Egg tarts were good, served warm, and the filling tasted fresh. We ended up paying £7 apiece for ample food, including service charge and tea all round (50p/person).