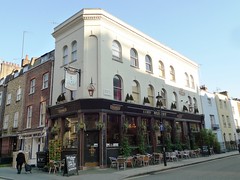 It's a fairly traditional-style pub. There's some outside seating. The inside seating is a mix of larger tables with upright chairs, and smaller tables with armchair-like things that aren't as comfortable as they look.

Bob and Northern Steve visited on a Friday evening in April 2008. Beers available were Young's Ordinary (£2.80/pint) and Special (£2.95), and Deuchars IPA (£2.95). The beers were all okay if not a little lively. The staff were happy enough to top them up.

The atmosphere in the pub was quite pleasant. It wasn't full or empty but just right. By the time we left at 10ish there were no spare tables but we had no trouble finding one at 6:30pm. The music was the right level and and quite good, rock and grunge from the 90s. There was free wireless, though whether this was intentional is a debatable point (Kake, on a visit a couple of months later, could see an unsecured wireless network but not connect to it in any useful way).

Kake and doop visited on a Monday evening in July 2008. Special and Ordinary were still on, but the Deuchars had been replaced by Waggledance at £3.05/pint. The Waggledance was served warm and tasted a bit sour, and there was some debris in it too (didn't bring this to the attention of the bar staff as I wasn't sure until I got to the end and saw the debris whether the problem was with the pint or my tastebuds --Kake). They had a sign up advertising a 2-pint jug of Pimm's for £10; doop had a glass instead at £3.20, and it was good, with orange, lemon, lime, apple, strawberry and cucumber all included as is Right and Proper.

There were only a few other customers in when Kake arrived around 6pm, but the place had filled up a little more by the time we left just before 8pm. There seemed to be a fair few regulars popping in for a pint and a chat. The lady behind the bar (might have been the landlady?) was very cheerful and friendly.

According to the Young's website as of January 2013, food is served noon-3pm and 6pm-9pm Monday to Saturday, and noon-4pm Sunday. As of July 2008, starters were between £3 (garlic bread with cheese) and £3.50 (e.g. breaded mushrooms). Mains were between £ 7 (e.g. homemade burger) and £8.50 (pie of the week with mash and veg or chips and salad). Sandwiches (served with salad and chips) were between £5 (e.g. cheese and homemade pickle) and £5.50 (e.g. roast beef with horseradish), and baguettes (again with chips and salad) between £6 (e.g. halloumi with spinach and tomato) and £7 (rump steak with onions). Filled jacket potatoes were £5-5.50.

Kake tried the breaded mushroom starter (£3.50) in July 2008 - the portion was enormous, easily enough for two people, and it came with a decent dressed salad too. Quality was fine; the mushrooms were a little chewy but I quite like that in a mushroom.

Accessibility: A fairly high step up to get in, but after that it's all on the level. Bit of a squeeze to get into the ladies' though.