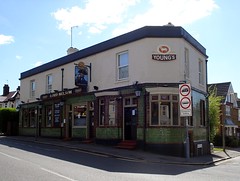 This is a traditional-style pub, long and narrow with the bar facing a couple of entrances on the long side. The interior has a mix of swirly red and maroon carpeting and wooden flooring. There's at least one flatscreen, a fruit machine, and even a parrot photo.

The outside has a tiled frontage with plenty of Young's branding that's also echoed on the half-frosted windows. There's a beer garden to one side with some very comfortable-looking furniture photo and a covered area for bad weather.

Kake visited on a Friday lunchtime in August 2012. The four handpumps on the bar showed clips for Young's Special and Ordinary, but I had a pint of lime and soda for the very reasonable price of 50p. There were three other customers when I arrived a little after midday. There was no music playing, but the flatscreen was showing Paralympics coverage with the sound on.

Snacks are served at lunchtimes, according to the Young's website as of October 2009 (there was no sign of this on our August 2012 visit, but it may have just been too early).

A sign seen in August 2012 advertised a trivia quiz on Thursday, though we don't know if this happens every Thursday.

Accessibility: Steps to get in at all entrances, and another step to the beer garden. No steps to toilets once you're in.