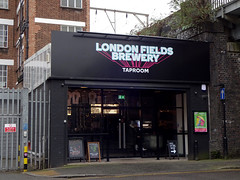 The London Fields Brewery Tap Room was a pub in London Fields. In December 2021, the brewery announced that they would be closing their business, including the taproom, with immediate effect. Carlsberg reported that they are looking to sell the brand (article in the Grocer).

As made clear by the name, this is the tap room for the London Fields Brewery, which was founded as an independent in 2011 and sold to Carlsberg in 2017 (see older version of this page for a description pre-sale).

It's bigger than it looks from the outside, extending under the railway arch where trains rumble overhead. In line with this, the decor gives a nod to two perhaps more traditional railway arch users — graffiti artists and light industry — with a corrugated ceiling, utilitarian grey floor, and large pop-art murals on the walls. Seating is provided by picnic benches, double-length and extra-wide to match the proportions of the space. Brewing equipment is on show behind glass at the back, and a semi-open kitchen is tucked around the side of the bar.

The beer on offer is all keg — according to a member of staff in January 2020, they tried stocking cask, but it didn't sell, and they decided to stop in order to avoid all the waste. It's all brewed on-site aside from a couple of their higher-volume beers, which are brewed elsewhere in order to free up the on-site equipment for a wider range of smaller-batch recipes.

Kake visited on a Friday early afternoon in January 2020. There were half a dozen other customers when I arrived a little before 2pm, and plenty of lively conversation going on. Music was playing, not too loud.

As noted above, all the beers are keg. A half of Sisters Are Brewin' It (with 0.5% alcohol) was £2.40. Service was friendly, efficient, and helpful.

Accessibility: No steps to get in, and no steps to the toilets, which consist of individual unisex cubicles including an accessible one. Most of the seating is fixed to the tables.