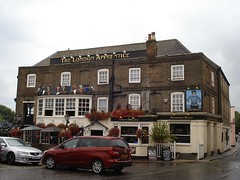 This large pub stands on the bank of the Thames at Isleworth, offering views along the river both from inside and from outside on its patio seating.

Entry is into a small area running lengthways along the bar. To the right, this leads to a small tucked-away area with a quiz machine, high-stool seating, and the accessible toilet/baby change. To the left, the rest of the pub opens up with plenty of tables and chairs for diners and drinkers.

Kake visited on a Friday lunchtime in September 2013. There were quite a few people in when I arrived around 1pm, and a small queue at the bar, though there were still plenty of free tables. Music was playing, not too loud, much of it from the '90s.

According to the London Apprentice website as of September 2013 (and a board outside in the same month), food is served noon-10pm every day. It comes from a standard Taylor Walker menu supplemented with a specials list photo (which may also be chain-wide; it wasn't entirely clear).

Kake tried one of the specials in September 2013. Spicy basmati rice with chorizo, prawns, and roasted vegetables (£13) photo was quite disappointing for the price. It was far too sweet, tasting mainly of bottled sweet chilli sauce. The roasted vegetables consisted of red onion wedges and chopped green pepper, both slightly undercooked. The rice didn't particularly resemble basmati. On the upside, the prawns were cooked competently, and both prawns and chorizo came in generous quantities.

According to a sign seen in September 2013, quiz night is Sunday from 8pm, with entry costing £1 per person.

Accessibility: A small step to get in. Once you're in, it's step-free to the bar, much of the seating, and the ladies' and gents' toilets. A small amount of the seating (and the accessible toilet) is up one step, and the Riverview Room (function room) is up a flight of stairs on the first floor.