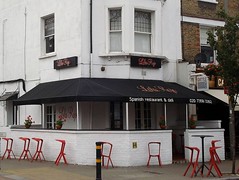 The main room seats around 25 or so, mostly at two-person or four-person tables, though there's also seating for six at a sort of desk/sideboard-like table towards the back. A blackboard here lists the daily specials. Another small table (described optimistically on their website as "an ideal place for an intimate dinner for two") is squeezed into the corridor leading to the toilets and the back room. Outside, a number of backless high stools offer bar-style seating at what is essentially the wall around the property boundary; a clever and unusual use of public space.

Kake, Sarah, and Jo visited on a Wednesday evening in August 2010. We'd booked in advance, and suspect we might not have been able to get in if we hadn't, since the place was full very soon after we sat down at 7pm.

Overall, the food was fine, with some high points and some low. There were plenty of vegetarian options to keep Jo happy, and although many of the dishes were quite different from the classical preparations, this generally worked well.

Crispy aubergine (£3) photo would perhaps be better described as "aubergine crisps" — this was quite a technical achievement in that the ultra-thinly-sliced aubergines were perfectly crisp and not soggy at all. They were a little too browned for Kake's taste, but this is probably unavoidable given the cooking method, and Sarah and Jo thought they were great. Catalan bread with tomato (£2.60) was a reasonable serving for the price, and competently executed, though the tomatoes were somewhat lacking in flavour.

Aubergine cannelloni with goat cheese and ceps (£5.75) photo was tasty, substantial, and not overly greasy. Breaded artichoke hearts with chive foam (£4.75) photo were nicely textured and the breading wasn't too heavy. Manchego cheese with tomato jam (£6.75) photo was served as unusually thin slices, drizzled with the tomato jam and topped with fresh rocket and a couple of slightly greasy croutons.

Patatas bravas (£5), which usually comes as a pile of deep-fried potato cubes topped with a spicy tomato sauce, was reimagined here as a neat line of hollowed-out potato cups filled with a foamy sauce photo; tasty enough, though Kake wished there had been at least a hint of chilli heat somewhere in the dish.

Cod with crispy potato and morcilla (£7.60) photo was sadly let down by the cod component, which was oversalted to the point of inedibility (we reported this to the staff, but no apology was made, let alone an offer to remove it from the bill). Scallop medallions with vegetables and olive oil mayo (£7.80) photo were also disappointing; the scallops were tiny, overcooked, and swaddled in a bland batter that added nothing to the dish.

Confit of suckling pig (£7.85) photo more than made up for the fish courses, however; the crackling was thin and crisp, the meat was tender, the accompanying vegetable crisps were crisp and non-greasy, and the vanilla apple puree and (herb?) sorbet were appropriate and well-executed.

Service was efficient and brisk-bordering-on-brusque; this was OK, since we didn't really need to ask any questions about the menu, and also unsurprising given how busy the place was. Iced tap water arrived in a carafe which was filled promptly after we emptied it. Our final bill for food plus two bottles of their "wine of the month" between the three of us came to £35/head including the auto-added 12.5% service charge.

Kake's verdict: There were more hits than misses, and there are other interesting things on the menu that I'd like to come back and try. I think I'd prefer to come at a quieter time, though, if such a time exists, since it was rather crowded and noisy even on a Wednesday evening, and I'm not sure the food was really amazing enough to make up for that.

Accessibility: Two steps up to get in. Can't remember if there are more steps inside. Some of the seating is on high stools.