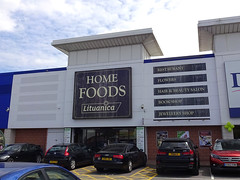 Lithuanian restaurant in Beckton, just around the corner from Beckton DLR. It's located in a unit that also includes a Lithuanian supermarket, jewellers, bookshop, and beauty salon, and is part of a medium-sized chain that has smaller branches elsewhere in London including in Barking and in Walthamstow.

The restaurant is on the first floor, and quite a nice space too, despite being canteen-style. The pale-wood floor and white-painted tables contrast with the dark grey walls, while chairs in shades of yellow and grey tie it all together. Four raised booths are along the side wall, backed by wood panelling hand-painted with still life and landscape art. It seats around 75 people in all.

The Lituanica chain is named after the famous Lituanica aeroplane (which crashed after a transatlantic flight in 1933), and so it's unsurprising to see here a large replica of the plane hanging above the open staircase that leads up from below, as well as a huge painting of Lituanica in flight on one wall.

Service is from the counter at the back — order and pay here, and most likely your food will be dished out immediately for you to carry it to your table on a tray. (Some items require a brief wait, in which case staff will bring them to the table for you.)

Kake visited on a Saturday lunchtime in July 2017. There were a scattering of people in when I arrived around 12:30pm, but plenty of free tables — even two of the booths were free. People came and went during the hour I was there, but it never got more than about half-full. Pop music was playing, somewhat louder than ideal for conversation. It was a hot day, and I was grateful that they had the aircon on.

My first two choices — dumplings with curd, and cepelinai (stuffed potato dumplings) — weren't available, so I went for žemaičių (potato pancakes stuffed with meat; £6 for a full portion; half-portions are also available) photo. These didn't look enormously promising when they arrived, but they were pretty good, with a nice contrast of textures between the crisp breadcrumbed exterior, the mashed-potato interior, and the minced meat filling. The seasoning was just right, and the sour cream provided on the side added enough interest that it never got tedious to eat despite the size of the portion.

Child-friendliness: They have at least two highchairs, the type with no tray and very little back support. There were several children in during our visit. The ladies' toilet has a pull-down nappy change table (gents' not checked).

Accessibility: Step-free into the supermarket, but the restaurant is up a steep flight of stairs (with sturdy handrail) and there's no lift. No steps between restaurant and toilet.