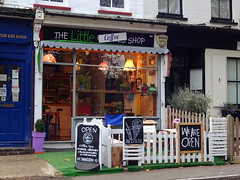 Cafe and coffee shop in South Croydon/Sanderstead, just opposite South Croydon Recreation Ground and a short walk from both Purley Oaks Station and Sanderstead Station. It opened around June 2017.

Note: The Little Coffee Shop changed hands in early 2021. We haven't visited since, and so some or all of the details below might be out of date.

It certainly is quite "little", seating just ten or so people inside and another six out the front in a small patio area. Much of the furniture appears to be recycled, including school desks and chairs as well as outside furniture which looks to be built from reclaimed planks. Colourful bits of paintwork liven the place up. There's a display of handknitted baby clothes for sale in one corner, and advertisements for local art exhibitions and children's centres are on the walls.

As well as coffee, they have several teas, both caffeinated and non-caffeinated but all loose-leaf. Oat and almond milk are available at no extra charge. They also do sandwiches, savoury muffins, toast, and various cakes. All the sandwiches are made ahead of time in the morning, so may run out during the day; on our lunchtime visit we saw them sell the last-but-one at 12:45pm.

Kake has visited a number of times now, most recently in May 2019. On a Monday morning in October 2017, I was the only customer when I arrived around 8:30am, and retro music was playing, not too loud. On a Thursday lunchtime in April 2018, there were two other eat-in customers just before 1pm, with a few others in and out for takeaway coffees. Service has been friendly and welcoming every time, and the staff gave me the opportunity to chat without being pushy about it.

Tea (£1.70; English breakfast on my first visit and lapsang souchong on others) was served with a separate tea strainer rather than one internal to the pot, meaning I had to drink it relatively quickly to avoid overbrewing. It was good tea, though, and I appreciated the thin china teacup I was given to drink from.

A goat cheese, chilli jam, and rocket sandwich (£3.50 in October 2017) photo was pretty good. The bread was very good — the crust was chewy and not too thick, and the interior was soft but still structurally sound. The goat cheese was creamy rather than strongly-flavoured, but this worked fine in context. The chilli jam had a good flavour and wasn't too sweet.

A basil, mozzarella, and tomato sandwich in April 2018 had a good combination of flavours, with no one thing predominating. I bought this at lunchtime, by which point it'd been sitting out for a while, and the bread had gone slightly soggy on the bottom and slightly stale on top, though this is a minor criticism.

The Reuben sandwich in May 2019 photo was as good as I've come to expect here, with the same very good bread and a good balance of ingredients including some nicely sharp cheese. I'm not a fan of the type of Reuben where the fillings are dominated by a huge heap of beef; I prefer things to be in proportion, and this is what I got here.

Their savoury muffins vary in flavour from day to day. In October 2017, a cheese and bacon muffin (£2.20) was a generous size, not too salty, and studded with chunks of decent-quality bacon. In April 2018, a fresh herb, cheese, and cracked black pepper muffin was also good, with a pronounced but not overwhelming black pepper flavour.

Kake's verdict: It's somewhat out of the way, unfortunately, but if this was round the corner from my house I'd be in here all the time.

Child-friendliness: Children are welcome, and they have a basket full of children's books.

Accessibility: A large step to get in. Some of the chairs are rather uncomfortable, with hard bits that dig into you.