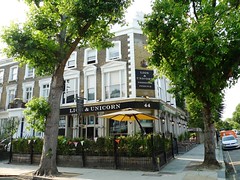 Pub with theatre upstairs in Kentish Town, in the Good Beer Guide.

Entry is into a bright, airy room with large clear-glass windows, a high ceiling, bare floorboards, and mismatched wooden chairs at sturdy pale wood tables photo. A small sideboard holds Scrabble sets and a couple of other games. Past the bar, the space leads back to a dining area, with tables set with cutlery and water glasses.

Kake visited on a Tuesday afternoon in September 2015. There were about half a dozen other people in when I arrived around 2pm, some of them having lunch. Music was playing, somewhat retro, not too loud.

Four of the five handpumps were on, offering Windsor & Eton Parklife, Sharp's Coaster, Sambrook's Wandle, and Young's Special. The fifth was clipped for Redemption Big Chief "coming soon". A pint of lime and soda was £1.70, and the staff member on duty took care to make sure it was made exactly as I wanted it.

Free WiFi is available, though you have to register with Geronimo and agree to let them send marketing emails to the address you provide. However, it doesn't seem to check that this address is a valid one.

According to a notice outside in September 2015, quiz night is Sunday from 7:30pm.

Accessibility: No steps to get in, and there's an accessible toilet on the level. Other toilets are down a flight of steps with a couple of bends and a non-continuous handrail most but not all of the way down on both sides.