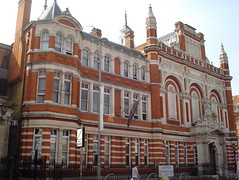 Housed in the Grade II listed former Leyton Town Hall near Leyton Station, this originated as a pop-up pub during the 2012 Olympics and opened full-time in the same venue in August 2013.

It's divided into several different areas, including a dining room with a notice instructing customers to wait to be seated. The bar area is dim and cosy, with an intricate mosaic floor. A side room is lighter and brighter, with bare floorboards and framed old correspondence on the walls photo.

The standard Antic quirkiness is toned down a little here, though there are still a few touches of it — including swag curtains and a row of standard lampshades hanging above the bar, and an animal skin mounted on one wall. The bar is somewhat inconveniently bisected with a wide square pillar. A jar of dog treats sits on a small table in the bar area, with a sign inviting owners to ask at the bar for a bowl of water.

According to their website as of September 2014, food is served 6pm-10pm Mon-Fri, noon-10pm Sat, and noon-6pm Sun; see a photo of the Sunday menu in the same month.

According to their website as of September 2014, there's live music every Sunday, monthly comedy nights, and a quiz on Wednesdays. According to a sign outside in the same month, there are DJs from 9pm every Friday and Saturday.

Getting to the toilets in the basement is a bit of an expedition, but the ladies' has a jar of tampons and towels for those "caught short on a night out", which is a very nice touch.

Child-friendliness: There's a pull-down baby change table in the accessible toilet on the ground floor. They also have at least four highchairs.

Accessibility: Four steps to get in. Once you're in, it's level to the bar, all seating, and the accessible toilet. The other toilets are in the basement, down a narrow flight of steps with bends and a fairly sturdy handrail on one side all the way down.