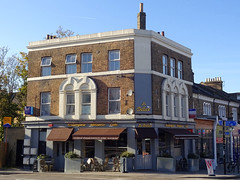 French-style cafe in Ladywell. It opened in April 2013 in the premises previously occupied by Masons.

The corner location allows for large windows on two sides, though its northeast orientation means that most of the light inside is provided by the recessed spotlights and chandelier-style lighting attached to the ceiling. A large glass display counter to one side offers cakes such as berry slice, chocolate brownie, pecan pie, and macarons as well as sandwiches and filled savoury croissants.

The floor is bare boards, and the space is divided up with wrought iron and wooden rails. Seating is primarily on upright wooden chairs, but there's also a couple of padded booths in one corner.

Kake visited on a Monday morning in November 2017. There were about a dozen other customers in when I arrived a little before 10am, and only a couple of free tables. When I left at noon, there had been a reasonable amount of turnover but still roughly the same number of customers as when I arrived. Peaceful music was playing, not too loud.

A pot of rooibos tea (£1.95) was generously sized, and made with a good-quality bag. An almond croissant (£2.40) photo was fine, not excessively sweet, and had a crisp exterior and soft interior.

They have WiFi — ask staff for the code.

Kake's verdict: A very pleasant place to do a couple of hours' work; I'd come here again if I was in the area.

Child-friendliness: They have a basket of toys and books for children, and at least three highchairs (the type with no tray and very little back support). There were several small children in during our visit. The ladies' toilet has a step stool and pull-down nappy change, but the gents' has neither.

Accessibility: A small step at the threshold and then two more just inside the door. Toilets are down a flight of stairs with handrail on one side.