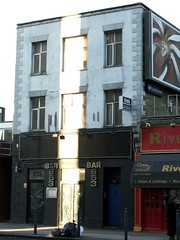 Note: The Laughing Buddha is no longer in existence; it closed some time around early 2008, and its location is currently (as of June 2008) occupied by a club known as Bar 653 (pictured). The information below is retained for those who want to know what it used to be like.

We've only had delivery from here, not eat-in; it's not bad for takeaway food, and we've used it four or five times.

Kake's comments on our November 2007 delivery: Tom yum with mushrooms (£3.75) had very little heat, and the mushrooms were just ordinary button mushrooms, though the flavour of the stock was good. Pan-fried chicken dumplings (£4) weren't bad; thick, chewy skins. Steamed fragrant rice (£2) was OK but nothing special. The Thai dim sum (£4) are basically siu mai - open-topped chicken and prawn dumplings. They weren't bad. Vegetarian steamed chive dumplings (£3.50) were a bit stodgy, possibly slightly undercooked, and without much flavour.

bob says the only thing he's not really liked from here is ped pad kiamchai (duck in sweet and sour plum sauce, £7.50), which was "OK but nothing special".

I seem to remember we've previously liked the mixed seafood salad (£7.50) - "prawns, squid, mussels, fishcakes and fish balls tossed in a hot and spicy sauce on a bed of salad".

Comment added by bob: The green curry and Masman Curry are very good. The steamed sea bass with black bean sauce wasnt that great. I found my tom yum with mushrooms to be tasty and slightly warming.

Comment added by Kake: 15 Dec: The Thai dim sum we had tonight were rubbish compared to the ones I've had from here previously; the filling was mushy, watery, and flavourless. I actually quite liked the sea bass with black bean sauce, but then I do like fish more than bob does. The green curry was rather good, yes. The prawns in batter were a bit greasy and could have done with a dip of some kind. I liked the tofu and mixed vegetables.

Comment added by Kake: 30 December 2007: doop ordered over the phone tonight; it sounded quite painful and indeed they messed up our order by sending us a tofu dish instead of the beef one we'd ordered. Would recommend ordering over the interweb in future.