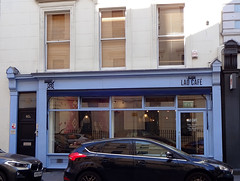 It seats just 32 people at small tables with reclaimed-plank tops, flanked by a combination of freestanding chairs and wooden bench seating. A huge mural of a smiling person covers one wall, and there's some nice decorative tile style lino under one of the tables.

A large window at the front lets in what sunlight makes it down past the tall surrounding buildings, augmented by stylised "bare bulb" lighting in industrial-looking wireframes. The industrial look is continued in the large air conditioning pipe that stretches across the ceiling and the plank-and-pipework shelves holding kilner jars of dried ingredients and terracotta pots of hanging ivy.

Kake visited on a Thursday lunchtime in September 2019. There were already half a dozen people in when I arrived shortly after their opening time of noon, and more turned up while I was there; by 12:30pm the place was half full and by the time I left at 12:45pm all the tables were taken. Music was playing, not too loud.

Kai khem som tumm (papaya salad with salted eggs; £9.50) photo was good, made with properly fresh ingredients and a nice balance in the dressing — not too salty, to allow for the extra salt from the egg. I asked for it medium-spicy, which was about right for me. Brown sticky rice (£3.25) seemed to actually be a mix of white and black, but was also good, cooked just right and with a nutty but not overwhelming flavour. Together they made a good size for lunch.

Service was efficient, and they were happy to let me pay partway through eating (I had a train to catch). Food came out quite slowly, but this seemed to be due to a small kitchen rather than any slackness on the part of the staff. Tap water arrived swiftly on request, with no attempt to upsell me to the unlimited filtered water at £2. A 12.5% service charge was added to the bill.

Kake's verdict: I'd like to come back and try more of the menu, but I'd be very wary of arriving any later than opening time.