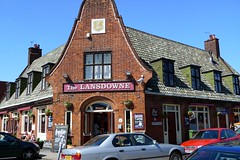 The Lansdowne was a sports pub in Edgware. It closed after a fire in December 2014, and has now been demolished.

A sports pub near Burnt Oak Station on busy Edgware Road, also referred to as the "L Bar" according to the plaque above the main entrance.

Note: According to the Feb/Mar 2015 London Drinker, the Lansdowne suffered a serious fire in December 2014, and is hence closed, hopefully temporarily.

It's housed in a large building set just back from the road, with a patio area in between featuring nine picnic-style tables, some of which are under cover. There's another smaller beer garden out the back.

Inside the pub there are two rooms, one at the side (empty on our visit, presumably because it is darker) and another along the front. Sport was playing on several prominent screens in both rooms, and being watched by the locals (though it was the FA Cup Final, after all). A sign indicated that there was a £5 minimum spend for those wanting to watch sports there, which may account for several people lurking out the front.

There are no handpulls for ale at the bar, with only John Smith's (£2.70/pint), as well as basic lagers and cider. Some bottled lager is also available, including Peroni.