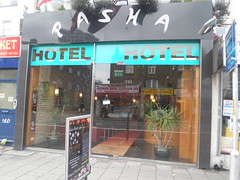 Hidden away deep inside an unassuming-looking hotel (Pasha) on Camberwell Road, the Kyrgyz Kazakh House offers cuisine from two countries currently rather under-represented in London — Kyrgyzstan and Kazakhstan in Central Asia — as well as a few Greek and Turkish dishes. They also offer takeaway, delivery, and online ordering via Hungry House.

The restaurant itself is located right at the back of the hotel. Following the red-carpeted corridor all the way along, you'll pass several hotel rooms, a Turkish bath, and a pool table, and finally end up at a plain-looking door with "Restaurant" written on it in small letters. Beyond this door, however, is a surprisingly large space photo, lavishly decorated with carpets and wall hangings photo, and even a small artificial stream with a bridge over it.

Kake, doop, Laura, and secretlondon visited on a Saturday evening in April 2009. We'd booked a table but probably hadn't needed to, since there were only about four other parties throughout our visit (their Facebook page does warn that they're sometimes fully booked though). On the phone, we'd asked for a table, but were actually seated in the "sit on the floor" type seating at the front, with two of us perched crosslegged and shoeless on a low carpeted ledge and the other two even lower down on beanbags on the floor facing us.

A dish of some decent hummous and a basket of thick, flat, tasty sesame bread arrived shortly after we were seated, and we ordered a pot of green tea to go with it while we looked at the menu. The tea was fine, and came with bowls to drink it from rather than cups photo.

We decided to order a selection of dishes to share; two of us went for the Kyrgyz Kazakh set menu (£16.50/head including dessert and tea/coffee, minimum two people) and the other two a la carte.

The set menu starters came from the "salads" section of the menu; vinegret (diced potatoes, carrots, and beetroot in an oil-based dressing with peas), olivie (Russian salad, or diced vegetables in mayonnaise), and funchoza (thin rice noodles with fried mince and vegetables, served cold) photo. These were generally considered a mixed bag; the funchoza was the most popular, while the olivie went mostly uneaten.

We also had a couple of orders of the mixed meze (£6) photo, which included more of that nice hummous along with cacik (cucumber in yoghurt), kisir (cracked wheat with herbs, peppers, tomato paste, olive oil, and lemon juice), yaprak dolma (stuffed vine leaves), and imam bayeldi (cold cooked aubergine). Kake was very disappointed with the aubergine, finding it undercooked and flavourless, but everyone else seemed to like it.

Hands-down the best starter, however, was the seld po Russkiy, a salad of marinated herring fillets with potato slices, gherkins, and red onion (£6) photo. The herring was wonderfully tender, salted just the right amount, and free from any harsh flavours. Kake would happily eat several platefuls of this.

Mains were a bit disappointing. Kake's hoshani (fried and steamed meat-stuffed dumplings, £5) photo had decent wrappers, puffy and of good texture, but the meat filling was uninteresting. doop's manti (steamed meat-stuffed dumplings, £6 normally but here as part of the set menu) photo again had reasonable wrappers, but the meat filling was the same not-very-interesting coarsely-ground mince as that in the hoshani. The sour cream that came with them helped a bit.

secretlondon's main of plov ("traditional beef meat" served with a buttery carrot rice, £6 normally) photo was heavy on the rice and light on the meat, while Laura's Islim kebab (diced lamb wrapped in aubergine slices and served with the same carrot rice, £11) was well-presented photo but very rich, with the oily aubergines and buttery rice combining to overwhelm.

We ended with a couple of desserts, since they were included in the set menu. Baklava (normally £2.50) were very good, obviously fresh, and served warm photo. Chak-chak (normally £3) was like puffed cereal stuck together with honey photo and was liked by everyone except Kake, who thought it was too hard and chewy.

Along with a couple of bottles of wine between the four of us, the final bill including service was just under £110, or £27/head, which is fairly reasonable.

Kake's verdict: I think I'd stick to the starters, if I came back. I also think I'd prefer to come back in the winter, rather than the summer; it's the kind of cosy place that's best enjoyed when you know the wind is howling outside and the skies are bucketing down.

secretlondon's verdict: I'd do some homework before coming again, but would like to try the other herring starter, as well as the Turkish bath.

Accessibility: Step-free from the street to the restaurant. Although some of the seating requires sitting on the floor, they have normal chairs and tables in the other half of the restaurant. There's a dedicated accessible toilet, though it was locked on our visit (and not with a RADAR lock).