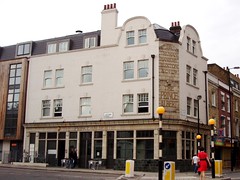 A restaurant which sourced its food locally, in a former pub building, which closed in August 2010 (due to the recession and a poor location, according to the head chef). As of March 2011 it is now a restaurant called Shibuya photo.

A restaurant on the corner of King's Cross Road, not far from King's Cross St Pancras Station, which prides itself in sourcing its ingredients within the M25 as far as is possible.

Inside, the old pub has been gutted and replaced by an odd decor arrangement involving curtains of metallic beads swathed everywhere, including in front of the windows photo of interior. This has the effect of making it difficult to see inside (though seeing out is fine). When combined with lack of signage indicating the restaurant name (presumably the original tiling is listed), this can make the place seem a little imposing from outside.

Staff, however, are perfectly friendly, and on a Friday lunchtime there weren't many other diners. On a Sunday lunch there was also space for more diners.

The menu is updated regularly, and, apart from the ingredient-sourcing policy mentioned above, focuses on using plenty of herbs and seasoning (there are plentiful mentions of chervil, chard, sorrel, sage, lavender, et al., on our menu). The lunch menu is divided into mains and desserts, with smaller dishes (around £6) nearer the top, and a couple of vegetarian options. There's also a cocktail aperitif offered on each menu photo of lunch menu in June 2009.

A Sunday lunchtime visit in June 2009 for nine people went without a hitch, our party accommodated over two adjoining groups of tables (their arrangement means that six is the maximum per table). Service was very friendly, and food came without any significant wait. A garlic soup starter (£5.50) photo was rich and creamy with plenty of flavour as you'd expect but also an oiliness from the use of butter (balanced a little by the croutons), and the ox tongue (£7.50) also got excellent feedback from those having it. For the mains, most went for either the pork or chicken (£17.50, the latter having clearly been sourced from a very happy animal, as my friend put it), and Ewan's salad with shaved turnip, boiled egg and tiny potatoes on a bed of fresh leaves and tarragon (£10.50) photo was a lot better than he expected, certainly one of the better salads in recent memory. Being light, it also left room for a gooseberry and ground elder fool (£5.50) photo, with a slice of shortbread, which was another creamy dish. Sarah's pancakes with strawberry icecream and a strawberry sauce was colourful and tasty as well (£7) photo. Aside from the standard lunchtime dishes, the menu also offered a range of brunch options, with plenty of egg-based dishes, including a fine eggs florentine (good value at £9) photo.

Kat visited in mid-October 2008, on a reasonably busy Wednesday evening. We took advantage of the interesting local beer selection, which included a number of Greenwich Meantime ales. The starter of roasted hare with beetroot worked very well, although the portion was rather too large. The main course of chicken was accompanied with spätzle (fried dough noodles) — both were rich-tasting and extremely filling, so thankfully the waiter had advised us that extra side dishes probably weren't going to be necessary. Choosing a light dessert (a delicious selection of sorbets served with a rather potent vodka) seemed wise. The service became a little slow after we had ordered our food, but the friendly waiting staff did apologise for this and 'failed to charge' us for our last round of drinks (the total came to £84 for two people). We also felt the low lighting worked very well with the hanging beads to give a cosy atmosphere.

On a September 2008 lunchtime visit by Ewan, a basket of bread was set down after the mains had been ordered. A jug of tap water was also happily supplied. Ewan's squash, Spenwood and spring onion pirogi with chervil and sour cream (£11.50) was an excellent dish, with the pirogi (dumplings) avoiding any kind of stodginess. As a base for the pirogi, the delicately-flavoured chervil worked well with what tasted like fennel, and was in all very satisfying. My companion's pan-fried Mersea sole with chard and bacon spätzle, green beans and nasturtium butter (£16.50) was also praised, the butter especially. The cheese on the cheeseboard again was locally-sourced (Spenwood, Waterloo and Wigmore cheeses, £7.50), while Ewan's Konstam castle cake with vanilla icecream and strawberry jam (£6) was a simple dish, contrasting the bold, traditional flavours of the icecream and jam nicely with the toasted slices of cake.

Ewan's verdict: The use of ingredients is interesting and inventive. I would happily return.