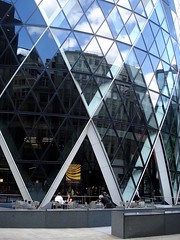 It's part of a small chain that Kake has always considered pretty reliable (I used to be a big fan of the Gray's Inn Road branch when I worked in Holborn a few years ago). Sandwiches are hand-wrapped in clingfilm, and resemble something you'd make for yourself rather than the end result of a production line. Because of this, they generally have a short shelf life, so noon is a better time to grab a sandwich than 2pm - especially as they seem to try to stock only as many sandwiches as they can reasonably expect to sell, so your choice towards the end of lunchtime will be smaller.

Konditor and Cook are perhaps better known for their cakes, and indeed this branch has a reasonable selection of cakes (not sure if this one is still available though). It also has a hot food counter.

It should not come as a surprise, given the location, that the interior has had some architectural thought put into it. The kitchen where the food is prepared is suspended over the shop space on a mezzanine, and the tables are sleek shiny black (and all joined together along the edge next to the "wall", so they wobble when the one adjacent to you is being cleaned). As well as inside seating for about 20-30 people, there are lots of tables outside on the pedestrian area surrounding the building.

Kake visited on a Monday afternoon in June 2008. The sandwich shelves were mostly bare, but a cheese and salad sandwich (£3) did the job and was pretty tasty despite having got a bit soggy from the tomato (see above re shelf life). A decent-sized mug of tea was £1.20, and perfectly adequate without being anything special. Service was friendly. I had no trouble getting a table; there was only a small sprinkling of other customers, as it was getting on for 3pm.

A commenter in September 2009 claimed they'd got food poisoning here. Since we have no way of verifying this rather serious accusation, and couldn't do anything about it even if it did turn out to be accurate, we're not the right people to report this to. Potential food hygiene violations should be reported to the appropriate local authority; in this case, the City of London, whose contact details are here.

Getting here: The entrance is round the Bury Street side of the Gherkin; if approaching from St Mary Axe itself, just walk round the building until you see the Konditor and Cook sign.