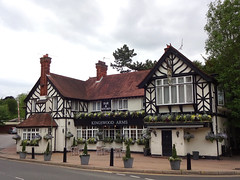 Upmarket pub in the Surrey village of Kingswood, very handy for Kingswood Station and originally the Station Hotel. Previously owned by Enterprise Inns, it was bought by Fuller's in early 2012.

A prominent sign on the door bars entry to those wearing "untidy workwear", noting that the dress code is "smart casual". The interior is all nooks and crannies, traditional pub decoration and when the weather permits, a roaring open fire. The bar frequently has dishes of mini cheddars, olives and cheddar cubes set out on it. There's a separate restaurant section.

On a Tuesday afternoon in August 2013 there were a couple of other customers in, and music was playing quietly. It was rather livelier on a Thursday afternoon in May 2019, with a fair few people in and '90s dance music playing (although not too loud).

Food is served all day. In May 2019 Kake had the fishfinger sandwich with fries from the lunch menu (£10) photo. The fish was cooked just right, not at all overdone, and the (pre-salted) fries were hot and crisp and actually tasted of potato. The tartare sauce appeared to have been made in-house rather than coming from a jar.

Although I'd been offered a choice of white or brown bread, and chose brown, what arrived was actually seeded white. The bread was lightly toasted, and one slice had rather lost its structural integrity — presumably it broke when they tried to fit a rather sturdy lettuce leaf inside the sandwich, but at this price point I'd expect a better solution than just serving it anyway.

Like other Fuller's pubs, they have free wifi via O2 (registration required).

Accessibility: A step to get in. Once you're in, it's step-free to the ladies', and one of the cubicles has a door that opens outwards (not sure about gents'). Some of the seating is up more steps.