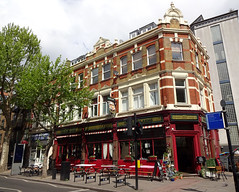 Trendy pub on the eastern part of Tooley Street in Bermondsey, fairly near Tower Bridge.

Bare boards underfoot give way to decorative tiling around the small bar tucked into the corner of the L-shaped interior. The space is cluttered with all sorts of objects: small potted plants, displays of ceramic plates and teacups, standard lamps, sideboards, bookcases, a disco ball, a pewter elephant, a plaster giraffe's head topped with a straw hat, a swan in a sparkly pink crown, a mini phonebox, and even a doll's house fixed firmly to one wall. Old teapots in a variety of styles hold cutlery and napkins on the tables.

Kake and bob first visited on a Saturday evening in September 2008, when the beers available were Ruddles County and Greene King IPA. Several of the tables were reserved, and all the rest were laid with cutlery and napkins, but there was no problem with us coming in just for a drink — though this might have been because it was quite early in the evening and there weren't many customers in yet. Some of the other customers were eating; the food looked and smelled pretty good, and Kake would like to come back some time and try it.

When Kake visited on a Monday lunchtime in April 2019 there were four other customers at 12:15pm, and several more turned up while I was there, some apparently regulars. Music was playing, not too loud, though a large freestanding speaker to one side suggested matters might be different at other times. Service was friendly. The ales were Robinsons Dizzy Blonde, Purity Mad Goose, and Greene King IPA. A pint of lime and soda was a pleasingly-cheap 80p, and stirred properly with a bar spoon too.

Accessibility: There are two entrances, both of which have one step up to get in. Once you're in, it's step-free to the ladies' toilet but there are two steps to the men's, and a narrowish corridor. The ladies' cubicles are quite narrow to the point where one almost has to rest one's leg on the sanitary bin in order to wee (though one of them has a door that opens outwards, at least).