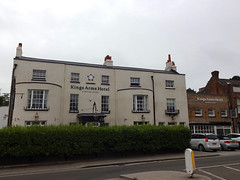 It was previously a pub and hotel run by Hall & Woodhouse (see older version of this page for a description), but this closed down in August 2017. After a change of ownership, it reopened in mid-2019.

The light, bright interior bears few signs of its previous life, though it does retain its ornate mosaic flooring with the name "Kings Arms Hotel", and there are still two handpumps spaced widely apart on the bar. Seating is a mix of banquettes and low-backed tube-frame chairs. Flooring is pale wood, and the walls are painted cream and hung with original modern art.

The old drinkers' space on the left has become a dining area, with marble-style tabletops ready-laid with wine glasses, linen napkins, and cutlery. The brick fireplace here is no longer in use, and is now filled with a large wine rack. Drinkers are now directed to the right, towards a small snug-like space that leads through to a larger drinking area with small half-round armchairs. Beyond this is yet another space down a step with a large table, possibly for private dining. Finally, there's a non-smoking patio out the front, with high hedges separating it from the traffic on the road outside.

Kake visited on a Monday morning in September 2019. Arriving around 8:45am, I was the only customer, though one other did turn up while I was there, apparently a hotel guest. Peaceful music was playing quietly. The handpumps were clipped for Surrey Hill Shere Drop and Hogs Back TEA.

Food is served all day, including bar snacks and breakfast. The breakfast menu is a little confusing at first glance, being a mix of complete-in-themselves dishes and build-your-own, but without being entirely clear about what's included with what.

In the end I went for smoked salmon (£9 including sourdough toast) and poached eggs (£4 for two). It was all served rather impractically, with the salmon and toast next to each other on a small wooden board and the eggs on a separate side plate photo, but when I asked for a proper plate to actually eat it from, they did eventually manage to find one photo.

The sourdough toast was good, with a chewy, flavourful crust. The eggs were poached decently albeit imperfectly, with nicely runny yolks but also partially runny whites. The smoked salmon was a generous portion, but quite soft — possibly even a little too soft — and on the salty side. Overall it was fine, but I wished I hadn't had to assemble it myself.

Earl Grey tea (£2.50) was made with a Teapigs tea pyramid, and came in a decent-sized pot.

Service was fine. A 12.5% service charge was auto-added to the bill.

Accessibility: A tiny step and then a ridge to get in. There's an accessible toilet on the level with low sink, alarm cord, and grab bars.