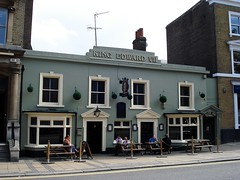 Pub near Stratford Station, offering a rotating range of bottled beers as well as cask ales. Also known as "King Eddie's" or "The Prussia", the latter being a reference to its pre-WWI name, "The King of Prussia". It changed hands in June 2012, but a year and half later not an enormous amount seems to have changed.

It has three interior areas, as well as a beer garden out the back. The front bar has seating for maybe about 30-35 people, at sturdy wooden tables with upright chairs, and a small amount of standing room. The saloon bar isn't incredibly obvious, but is reached via a door to the right of the bar; it's sometimes booked out for private parties. Finally, there's another room reached via a half-flight of stairs to the left of the bar; this one is more spacious, with a couple of sofas too photo.

There are four handpumps on the bar. On our March 2012 visit these offered Eddie's Best (the house ale, brewed by Nethergate), St Austell Tribute (£1.70/half), Bombardier, and Woodeforde Wherry; while in February 2014 the options were Hop Back Summer Lightning, Purity Mad Goose, Sharp's Doom Bar, and Bombardier. A pint of lime and soda in February 2014 was a shockingly expensive £3.20 — the soda came from small bottles, which gives some excuse for the price, but they really should have warned us about this before starting to pour it.

On our evening visits here (a Monday in March 2008 and a Thursday in September 2008) it's been quite full, though we managed to get a table both times. At the second of these they'd closed the kitchen for walk-in diners since they had a couple of large groups who'd reserved tables for dinner and the kitchen had reached capacity; on this visit, we had a little trouble hearing each other speak over the music and the conversations of others.

On our lunchtime visits (a Wednesday in August 2008, a Friday in March 2012, and a Saturday in February 2014) there have been a fair few people in, but plenty of spare seats. On the first two of these visits there were several other people eating lunch; this wasn't the case on our 2014 visit but this could have been because it was quite late for lunch (gone 2pm).

According to the King Eddie's website as of February 2014, food is served noon-10pm Mon-Sat and noon-9pm Sun. The menu aims for pub food, but on the interesting side, though vegetarian options are scarce; see menu photo from February 2014. In the past they've also had specials written up on a blackboard, though this wasn't the case on our most recent visit.

Kake first tried the food in August 2008, before the change of management. The lentil, mushroom, and coconut dahl with rice (£8.50) photo was quite disappointing. The dhal was overly sweet (it obviously had some kind of sweet chutney mixed in; I suspected this from the flavour and it was confirmed when I found a few chunks of the stuff). Extremely indistinct spicing too; I couldn't distinguish a single individual flavour. It reminded me of the curry powder/banana/desiccated coconut "curries" my mum used to make in the 1980s. The oddness of the dish was only amplified by its being served with rocket. The rice was fine though, and both rice and dhal were provided in generous portions. Another nice touch was the enormous linen napkin I got brought.

In February 2014, after the change of management, Kake was again rather disappointed with the food. Confit Gressingham duck leg with bean cassoulet, buttered leeks, and mash (£14) photo sounded good, but the duck was dry, the "cassoulet" was actually tinned mixed beans and sweetcorn in a rather unpleasant tomato-chilli sauce, and the gravy poured around the side had very little flavour. (No linen napkin this time — just a paper one.)

According to the King Eddie's website as of February 2014, pub quiz is on Sunday night and there's an open mic almost every Thursday (but not every Thursday — call ahead to check).

Kake's verdict: I like this as a pub, though I much prefer it in the daytime to the evening. I wouldn't eat here again unless it was something very simple as an accompaniment to beer.

Accessibility: One step down to get in. Half a dozen steps up to the back room. Two steps to the saloon bar at the side, from which the toilets and beer garden are also accessed.