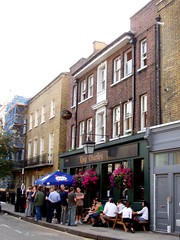 The emphasis should really be put on the small, as this is a simple one-room pub with a bar facing the front doors. At off-peak times, it is a lovely, quiet place for a drink off the beaten track, but after work and especially on a Friday (as on Ewan's January 2010 visit) the place gets completely rammed, though when the weather's nice there's plenty of spillage out on to the street outside.

Inside are a few small tables around the edge of the room, the largest probably holding around 6 people. There are also some tables outside for smokers. There's a (gas-fuelled) fire for warmth in the winter months, as well as a good juke box. Lighting is generally dim, with bright spotlights here and there.

There are four handpulls for ales, with a strong emphasis on Brodie's ales (brewed at The King William IV in Leyton). On a January 2010 visit, the ales were Everard's Tiger and Brodie's Doppel Dunkel Weizen Heizen and Christmas Tinkle, all well-kept. In October 2013, the ales were Morland Original, Ruddles County, and Brodies Kiwi. They also have the usual range of cooking lagers and basic bar snacks. A pint of lime and soda was 80p in October 2013.

Child-friendliness: A commenter on this page (Dominic F, July 2013) tells us that according to a member of staff he spoke to, the pub has a "no children" policy.