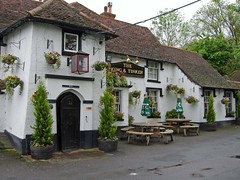 Pub in Forty Hill, a little way north of Enfield Town. It's quite off the beaten track, and only just inside the M25. It's located on Whitewebbs Lane at the northwest corner of Whitewebbs Golf Course.

The interior is divided into two parts, one more for drinking and the other more for eating, though there doesn't seem to be any restriction on where one can sit. There's lots of outside seating too, and a separate children's play area with climbing equipment.

Kake and friend visited on a Thursday lunchtime in September 2013. The handpumps on the bar were clipped for Greene King IPA, Old Golden Hen, and Adnams Southwold. A pint of lime and soda was £1.50.

There were a few other customers when we arrived around 12:30pm, with a few more trickling in during our visit. However the bar staff warned that they were about to get busy, and indeed there were reserved signs on some of the tables. No music was playing, but there was the sound of a TV from somewhere.

Spanish style vegetable quiche with side salad (£7 from the specials board) photo turned out to also come with chips, and the slice of quiche was rather smaller than expected. The chips were just frozen ones, but competently cooked. The quiche itself was fine but nothing special; the type you'd buy from a supermarket "essentials" range. Chilli con carne (£8) photo had a good texture, but was very plainly served with just boiled rice as an accompaniment.

Child-friendliness: They have a children's menu (though as of September 2013 it only has three options), and there's a children's play area outside.

Accessibility: One of the entrances is step-free but there's a step from here to much of the seating and another step from there to the toilets.