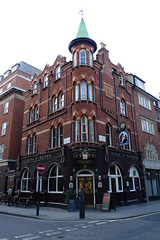 The decor is quite traditional; carpeted floor and a mix of banquette seating around the edges of the room and stools (no actual chairs), with three tables in the middle of the room. There are portraits of kings and queens above the bar, and a display of king and queen playing cards at one end of the room. A few picnic benches outside (not covered or heated) cater for smokers.

When Kake visited on a Tuesday afternoon in December 2008, there were a fair few people in, mostly younger people (quite possibly students, given the area). There was no music, and a flatscreen was showing a darts tournament with the sound off. Three real ales were available; Adnam's Bitter, Deuchars IPA, and St Austell Tribute (£1.70/half). When Ewan visited in November 2009 these three were on again, with the addition of Purity's Mad Goose.

On Kat's Thursday evening visit in June 2017, a pint of well-kept Tribute and a medium glass of house white wine came to £9.10.

Food is served lunchtimes only. On Ewan's Friday lunchtime visit in November 2009, there was a full lunch menu, with — alongside the sandwiches (£4.50 including chips) — all the usual pub staples including hot meals at £6-7 each. Ewan's vegetarian lasagne (£6.50) was served with some fresh crispy salad and a substantial portion of chips.

They have a function room upstairs, which as of June 2017 is free to hire as long as you make a donation of at least £2 per person to MacMillan Cancer Support (the charity supported by the pub), though if you want the bar up there to be staffed then that costs £100. They don't do food in the evenings, but if you've booked the function room then they're happy for you to bring your own food.

Kat's verdict: the K&Q used to be a regular haunt of mine in the 2000s when I worked in the area; a decade later it hasn't changed a bit (to my delight!).

Accessibility: Small step up to get in, another small step to get to the ladies' (which is quite small and a bit hard to actually get into).