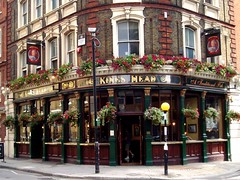 Used to be a Greene King pub near the Barbican, but now closed. The old review is retained below for people who want to know what it used to be like.

The great convenience of the King's Head is just how close it is to the Barbican Centre (opposite the Silk St entrance) -- which means not only is it open weekends, but also it tends to get full before and after major concerts at the Barbican (as well as the usual city office workers on weekday evenings).

It has the usual ales on tap and no more (Greene King IPA and Abbot Ale), as well as basic lager selection. The food is perfectly edible but sticks to the basics and fairly stodgy at that (pasta/lasagne, burgers, etc.).

It also shows sports but not too intrusively. Perfectly fine for an after-show drink.