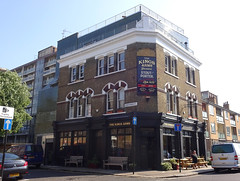 Good Beer Guide pub in Bethnal Green, run by the same people as the Earl of Essex in Islington.

It's a single room inside, dominated by the large square freestanding bar in the middle. The pub's location on a corner allows for large windows on two sides, letting in plenty of sunlight, though there's a darker and more secluded area towards the back. The decor is plain but well thought out, combining dark olive paintwork with white tiling and dark wood flooring. Interest is added by etched glass in an entrance lobby and framed insect specimens on the walls.

Seating is primarily on wooden ledges built in beneath each window, flanked by narrow wooden tables and small upright chairs that look as if salvaged from an old school. The former are more comfortable than they might sound, while the latter are not. Several stools surround the bar, and there's a couple of picnic benches out the front too, on a quiet back street.

Although they have six handpumps and 14 keg taps on the bar, these are kept unclipped. Instead, the beers and ciders available are listed on a menu with brief tasting notes, as well as on a board on the wall. A fridge towards the back holds bottled and canned craft beers.

Kake visited on a Wednesday afternoon in September 2016. There were nine or ten other customers when I arrived just before 2pm. Indie music was playing, fairly quietly. The air conditioning was perhaps a little too enthusiastic, and I was almost chilly by the time I left despite the very warm day.

Four real ales were listed, all priced between £4 and £4.50/pint: Tiny Rebel Cereal Killer, Cloudwater Session IPA, Magic Rock High Wire, and One Mile End Hospital Porter. A pint of lime and soda was £1.20. Service was friendly and helpful.

Food is limited to bar snacks: cheese, meat, and scotch eggs. In September 2016, Kake's vegetarian mushroom and tarragon scotch egg (£6) photo was delicious, with a runny yolk in the egg and a well-flavoured coating. It was accompanied by a very good piccallili, with crisp, distinct vegetables and a pleasing emphasis on coriander seed in the spicing.

Accessibility: No steps to get in, though the door is somewhat narrow. Toilets are down a very narrow staircase with a sturdy handrail on one side.