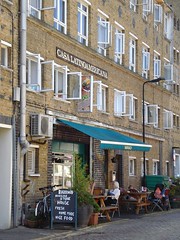 Brazilian restaurant in Kilburn. It was previously known as Barraco (pictured), but changed its name to Kaipiras in 2017.