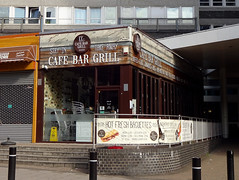 Cafe-bar in Woolwich. It was previously known as Koffees & Kream photo, but rebranded to KKs Cafe Bar Grill in 2016.

The interior has a semi-industrial feel, with a multitude of light fittings including bare bulbs encased in wire cages, and others resembling upside-down electric candles in jam jars. An exposed I-beam runs diagonally across the ceiling, with structural-looking poles coming off it, and panels of rusted corrugated steel hang here and there on the walls.

The bar is backed with white tiles and faced with reclaimed timber, echoed on the menu with a photo of weathered boards. The industrial aspects of the decor are further softened by the line of half-height booths that runs along one wall, and a long upholstered banquette at the back. A large window at the front and a row of openable windows opposite the bar let in less light than one might expect, due to overhang of the neighbouring building.

It's licensed to serve alcohol, and offers wines by the glass as well as a few spirits and bottled beers (a display of craft beers from the local Hop Stuff brewery was prominent on both our visits).

Kake has visited twice now, most recently in July 2019. On a Wednesday lunchtime in September 2015 it was pretty full when I arrived around 1:30pm, with only a couple of free tables, but I seemed to have hit the peak of the lunch rush as people were already starting to leave as I sat down. There were a fair few people coming and going throughout my visit, though. Music was playing, fairly perky, not too loud. On a Thursday morning in July 2019 they were 5 minutes late in opening, and the chef didn't turn up until around 10 minutes later. I wasn't the only person waiting outside — when they opened the doors there were two others with me. Music was playing on the radio (Magic FM), not too loud.

In September 2015 a chicken and tomato sandwich (£3.10 for the chicken sandwich plus 30p for the tomato) photo was pretty good for what it was, with large pieces of flavourful chicken and just the right amount of (optional) mayonnaise. The bread was nothing special but did the job.

In July 2019 I had the Mediterranean breakfast (£8.50) photo, which included two fried eggs, grilled spicy sausages, grilled tomatoes, grilled halloumi, feta, fresh uncooked tomatoes, cucumber, olives, two slices of supermarket bread, and a cup of tea. The yolks on the eggs were solid, and I'd have preferred them runny, but the sausage was flavourful and the feta and olives weren't overly salty. Overall it was fine, with a good balance of ingredients, though I did think serving it with supermarket sliced bread instead of e.g. Turkish bread was an odd decision.

On both visits I asked for my cup of tea (£1.30) to be made "very weak", but despite agreeing to this they didn't seem able to execute it. On my first visit they left the tea sitting on the service counter for over a minute with the teabag still in, making it much too strong (they happily replaced this when the problem was pointed out) and on my second it arrived with a teabag concealed in the bottom of the cup, which I didn't discover until it was too late.

No service charge was added to the bill either time; instead, there was a tip saucer on the counter next to the till where you pay.

Accessibility: No steps to get in, just a small ridge (the photo on this page shows steps, but there's a long ramp to the left). No steps to the seating or the toilets, and the ladies' toilet has a relatively large cubicle with grab bars, though on our July 2019 visit the alarm cord had been cut so short as to be useless.