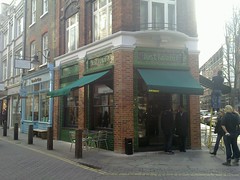 Just Falafel was a fast food style falafel place on Monmouth Street in Covent Garden, part of a Dubai-based chain. It closed for good in February 2015.

According to a press release on their website, this is the first UK branch of an established Dubai-based chain, it opened in late 2012, and it's completely vegetarian.

There are several low stools inside and a couple of tables outside for people to eat at.

bob visited on a Monday lunchtime in February 2013, a couple of weeks after it opened. I had an original falafel meal which consisted of a several falafels in a wrap served with chips and a drink (£5). It was OK.