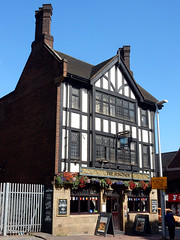 It was previously a two-bar pub known as the Windsor Castle photo, but following a refurbishment in 2013-ish, it's now a single large space which opens up more the further back you go.

Entry is into what used to be the front bar, where wooden flooring leads back to the bar itself, accented with a double line of feature tiles. Beyond this is an airy, open space with a patterned carpet, leaded skylights, and a small fireplace with a huge arched mirror above. The part-panelled walls are painted a neutral colour, and framed vintage photos (though with no captions or context) are here and there. Several feature walls are papered with fake bookshelf designs. Finally, there's a reasonably-sized patio beer garden out the back.

Kake visited on a Thursday morning in September 2015. I was the only customer when I arrived shortly after 11:30am, but others started arriving around 20 minutes later. Music was playing, not too loud. The staff member on duty was very friendly, and happy to explain a few details of the history of the pub.

All six handpumps were on, offering Sadler's One Hop Stop, Everards Equinox (a seasonal ale), Sambrook's Junction, Sambrook's Pumphouse, Greene King IPA, and their house ale, Taylor Walker 1730 (brewed by the Westerham Brewery). A pint of lime and soda was £1.

Accessibility: A step to get in, and another to the beer garden. Once you're in, there's no steps to the toilets, including an accessible one.