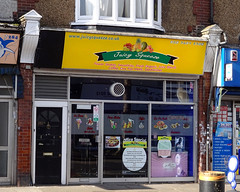 Juicy Squeeze was a Caribbean cafe and juice bar in South Croydon. It opened around October 2015 but closed again by April 2017.

Caribbean cafe and juice bar in South Croydon. It opened around October 2015.

It's a small space, with just ten high stools clustered around tall tables plus a small sofa and armchair at a low coffee table to seat another three or four people. The walls are bright blue, adding interest to the dark grey tiled floor and black pleather seating.

Orders are taken at the counter at the back, and payment is made here afterwards too.

Kake visited on a Friday lunchtime in February 2016. There were no other customers in when I arrived around 1:30pm, and this remained the case during my visit. Music was playing on the radio, not too loud.

Coleslaw on the side was fresh and not overly mayonnaised, and a good contrast to the spicy stew. The rice and peas were fine; the peas weren't overcooked or undercooked, and the rice wasn't dry, though I might have preferred a bit more coconut flavour in it.

The juice was a combination of kale, parsley, mint, celery, cucumber, and watermelon (there should also have been coriander, but they'd run out — I said that was fine). It was refreshing and not too sweet, though quite bitty towards the bottom. It was served in a plastic glass even though I was eating in.

Accessibility: A very small step to get in, about an inch. A larger step and a tight turn to the toilets.