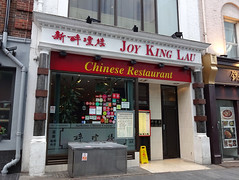 Chinese restaurant in a small side street just off Leicester Square.

Note: According to a photo of a notice posted on Twitter, as of March 2020 Joy King Lau is temporarily closed until early April.

The frontage is quite small, but the building goes back a fair distance and there are tables on at least three floors (a lift goes between some if not all of them). Although there's not much natural light inside except for right at the front, the place has been fairly well lit throughout on both our (lunchtime) visits.

Kake, Sarah, and Lex visited for dim sum on a Wednesday lunchtime in April 2009. It was reasonably busy, but there was a table free for us, luckily quite near the front.

Scallop cheung fun (£3) weren't bad; the scallops were good, but the wrappers were a little thick. Scallop dumplings (£2.40) also had a good flavour. Vietnamese spring rolls (£2.20) were nothing special. Fried turnip paste (£2.10) had a good browned crust on it and a decent texture. Spicy tripe (£2.10) wasn't particularly spicy, but it was certainly tasty. We were intrigued enough by the char siu croquettes (£2.10) to give them a try; they turned out to be small pastries rather than actual croquettes, but they were pretty good, served warm with a generous filling of flavourful pork wrapped in a good, properly flaky pastry. (Note: prices given here may not be current — see below.)

Service was efficient; tea was brought to the table the moment we sat down, our teapot was refilled assiduously during our meal, and our food all arrived quickly. Our final bill was around £14/head for more than enough food (14 dishes) plus tea. It wasn't clear whether this included a tip or not, since it wasn't itemised — but adding up the prices afterwards revealed that either they applied a 15% tip without telling us, or the prices in the menu displayed in the window photo of menu were out of date.

Kake later visited alone, on a Thursday afternoon in January 2011. There were plenty of free tables on the ground floor when I arrived around 2:30pm, though there were several other customers throughout my visit. Staff were efficient and not unfriendly, there was again tea on the table as soon as I sat down, and they didn't bat an eyelid at me (non-Chinese) asking for the Chinese-only menu. From this menu, I had the 粉絲南乳羅漢齋煲 (fěn sī nán rǔ luó hàn zhāi bào; £8.80) photo, which translates as "monk's vegetable claypot with glass noodles and red fermented tofu" — there's also a monk's vegetable claypot on the English menu, but I don't know if you'd get the same thing ordering from there. What I did get was pretty good, with the fermented tofu lending a nice background note and plenty of interesting bits and pieces such as black fungus, at least one type of beancurd skin, fried beancurd, daylily buds, gingko nuts, etc. It was way too much for one person, but they happily packed up my leftovers to take home.

Accessibility: No steps to get in, and there's a lift to get you up to the toilets on the first floor. It is a little cramped inside though, with the tables fairly close together.