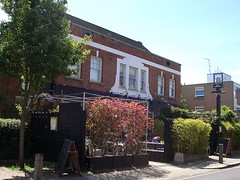 Mitchells and Butlers pub in Putney, part of their Castle sub-brand.

The interior is fairly standard "modern pub", with polished wooden floors and mismatched chairs photo. There's also patio seating at the front and a small enclosed outdoor area at the back, covered with a large parasol.

Kake and bob visited on a Monday lunchtime in June 2013. The real ales available were Sharp's Doom Bar, Sambrooks Junction, and Brakspear Oxford Gold. They also had Aspalls cider. Kake's half of Junction wasn't quite off, but was rapidly heading that way; when we reported this to the staff member on duty, he took it off sale. Flavoured lemonade from their summer drinks menu photo of menu looked pretty photo of drink but had very little lemon flavour and was too fizzy for Kake's liking.

There were a few other people in, most of them sitting outside as it was a lovely day. Music was playing inside, though not too loud.

As of June 2013, food is served noon-10pm Mon-Fri, 10am-10pm Sat, and noon-9pm Sun. As well as the main menu photo there's also a prix fixe menu photo, a weekday lunchtime sandwich menu photo, and a bar snack menu written up on a blackboard behind the bar. The offerings here are similar to those from other pubs in the same chain.

In June 2013, Kake's gnocchi with wild mushrooms, roasted squash, spinach, and cannellini beans (£10.50) photo was quite rich but had a good mushroom flavour, and the squash wasn't over-dominant as it can sometimes be. The lettuce leaf garnish embedded in the middle was a little odd, though; semi-cooked lettuce is not particularly appetising.

bob had the pork and chorizo burger (£11) photo, with additional mayo brought in an espresso cup photo. A shared side dish of spiced lentils (£3.50) photo had an overwhelming flavour of turmeric, and it wasn't clear which of the main dishes on the menu it was intended to complement; a more neutral spicing might have made more sense in this context.

According to a sign seen in June 2013, there's a pub quiz every Tuesday from 8pm.

Kake's verdict: I normally like Castle pubs, but for some reason this one didn't quite gel for me. I wouldn't say no to coming back, though.

Child-friendliness: On our June 2013 visit we spotted two highchairs with integral trays, and there was at least one small child in attendance.

Accessibility: A small step to get in, less than kerb height. However there are two sets of doors to get in, and on our visit the offset between the opened doors made the access quite narrow; we were glad we didn't have a pram with us. It's stepfree to the bar, interior seating, and toilets once you're in. There is an accessible toilet. There are steps to get to the back garden.