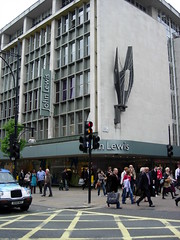 Large department store on Oxford Street, first opened in 1864. The store spread into neighbouring buildings and eventually back into Cavendish Square (the development of this side of the building was in defiance of planning laws, landing Mr Lewis in Brixton Prison for several weeks). Since 1929, it has been under the control of the John Lewis Partnership, an unusual arrangement whereby everyone who works for the company shares in the ownership of the business. They have another branch in Brent Cross, and Peter Jones in Sloane Square is also part of the same company.

The haberdashery section offers a selection of yarn including Rowan, Debbie Bliss, and Noro. They sell some beads and things as well, plus costume-making stuff such as feathers. They also sell sewing machines. There are two fabric departments; fashion fabrics (i.e. clothes) and home furnishing fabrics. The fabrics aren't cheap, but they're good quality and the range is wide. Some people have suggested that the yarn section is rather hard to find since the latest reorganisation (in 2007), and that the yarn selection is small and expensive, and the service can be "snotty". The general feeling seems to be that the haberdashery department is "not what it once was".

In the basement you can find the excellent John Lewis Food Hall, which is operated by Waitrose (part of the John Lewis Partnership). For hungry shoppers, there is a bistro on the third floor.

There are also extensive sections devoted to fashion (men's, women's and children's), homewares, electrical goods and electronics, curtains and carpets, linen, and the like. Prices aren't the cheapest on the high street, but the quality tends to be somewhat higher.

The sculpture on the eastern side of the building (pictured), is by Barbara Hepworth and dates from 1963.