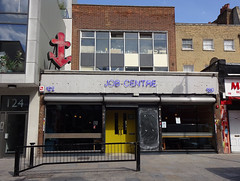 Inside, it's stripped back and bare, with an unfinished floor leading a long way back through the opened-out space. Overhead dangle the remains of supports for a (now-removed) false ceiling.

Given Antic's generally somewhat self-consciously "quirky" design philosophy, the rest of the decor here is remarkably restrained. One long wall is covered with rather 60s-looking wallpaper, and a collection of stopped clocks, all showing different times, hangs on another wall at the back photo. An old film projector sits rather randomly under a pair of thread-art designs framed using parts of reclaimed sash windows, next to a huge old-fashioned "WC" sign pointing the way to the toilets upstairs. A couple of steps lead down at the back to an outdoor area with a handful of picnic tables.

Kake visited on a Thursday afternoon in September 2015. Arriving shortly after their opening time of 4pm, I was the first customer, though a couple of others turned up shortly after. Music was playing from a couple of vinyl decks on the bar, fairly retro, not too loud.

Only two of the six handpumps were on (apparently everything else ran out all at once the day before), offering Volden Vim (£3.80/pint) and Old Rosie cider.

Kat visited on a Sunday lunchtime in November 2018 with a large group (we'd booked an area). The vegan roast (£11) was an aubergine pie with roast potatoes, carrots and grilled hispi cabbage (it normally comes with cauliflower too, the staff were happy to omit this horrendous vegetable on request). This was really good, well seasoned, lots of potatoes and enough gravy from the pie to coat everything. A pint of Salopian Darwin's Origin was £4.10. The music selection this time was soft rock: Fleetwood Mac and Steely Dan.

Food consists of sharing plates plus a small burger selection, with an extra roast dinner menu on Sundays. According to the Job Centre website as of November 2018 it's available 5pm-10pm Mon-Fri, 12pm-10pm Sat, and 12pm-6pm Sun.

There's free WiFi, with the password written on the wall behind the bar.

Accessibility: No steps to get in, and there's an accessible toilet on the ground floor (though this was out of order on our September 2015 visit). Other toilets are up a flight of stairs with a sturdy handrail on both sides.