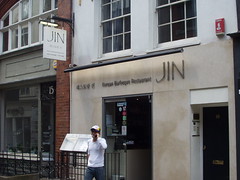 Korean restaurant in Soho. Does Korean barbecue. Each table has a barbecue in it. This is slightly annoying, since it means the tables have a solid stand so you can't stretch your legs.

The starters look expensive but are meant for 2 to 3 people, so aren't really too bad.

Comment added by mgjoyce: Food was nice. The comments coming from the table next to us were a bit rude. The staff was friendly and helpful.