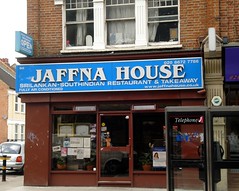 Sri Lankan (and South Indian) restaurant on Tooting High Street. It has a cafe and takeaway part at the front on the High Street, and a licensed restaurant part out the back (accessed via a separate entrance down a side street).

Kake, DrHyde, bob, and ilmari visited on a Tuesday evening in October 2008. We'd booked a table for 8pm, and were glad we did, as the restaurant part is very small and filled up quickly.

Although the menu also includes many of the British curry house standards, we were there to try the Sri Lankan dishes. We let bob do the ordering, as he'd had previous experience with Sri Lankan food.

We started with masala vadai (deep-fried lentil cakes, 80p apiece) and mutton rolls (deep-fried mutton and potato croquettes, 90p apiece) photo; these were basically OK, though the vadai were a little dry. We also had a portion of devilled prawns (£4.90), which were great; they'd managed to get a good amount of browning on the outside of the prawns without overcooking the interiors.

Sri Lankan food tends to be quite spicy to the average British palate, and although our meal wasn't unpleasantly spicy to us, it was just at the edge of Kake's enjoyment threshold, and would have been challenging at the least to anyone who doesn't like chilli — and bob mentioned later that he thought they'd toned it down for us.

Even though we also had a couple of lassis, a bottle of wine, and several bottles of Lion Stout, the final bill was only £15/head including service, which as DrHyde pointed out was "practically free".

bob, Martin and Phil visited in August 2010. They no longer seem to have any of the Lion Beers. Again the total cost came to about £15 a head.

Kake's verdict: I would happily come back.

secretlondon visited the cafe part one Friday in June 2016. I had the special thali (photo) they do on Fridays for £4.75. I didn't think it was particularly spicy at all. The cafe has a few tables, a counter with starters and a large statue of Hindu god Ganesh. There is a small toilet.

secretlondon has been back since, as above "it's practically free". They seem to have three different prices depending on whether you eat in the restaurant, the cafe or take away. To give an example, the thali above is £4.75 in the cafe, £4.50 to take away and £6.50 to have in the restaurant. They do a number of takeaway only meals which are really good value. Three pittu with potato curry, daal and sambal is £2.75. 7 string hoppers with the same and sothy is the same price. The pittu was dry and needed the accompaniments. Their short eats (vadai etc) are about 50p each to take away.