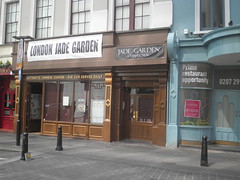 Now closed; was a Chinese restaurant on Wardour Street in Chinatown.

bob et al. visited in November 2007. Most of the dim sum was tasty. Duck tongues were interesting, but spare ribs were disappointing considering the standard of everything else. When ordering dim sum you fill in a form. It's in Chinese but it's okay the numbers do match up. There was copious tea. 10% service is included. A meal for 11 of us came to £130.

Restaurant seemingly split over two levels. One is a mezzanine above the kitchen I suspect.