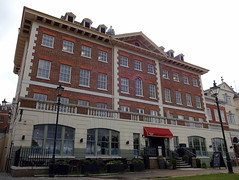 American restaurant and bar in Richmond, part of a small chain.

The seating is a mix of banquettes and dark-varnished upright chairs, and the floor a mix of wood and tiles. Tall stools are arranged around the curved bar, and ceiling fans turn slowly overhead. Art prints and black-and-white photos of American icons hang on the walls. A locked cabinet holds a display of different whiskies, while large windows give views of the river photo.

Kake visited on a Friday morning in May 2017. There were only a couple of other customers when I arrived shortly after 10am, and I was led to a table by the window. American music was playing, not too loud.

From their breakfast menu I chose buttermilk pancakes with bacon, blueberries, and maple syrup (£8.50) photo. The pancakes were light and fluffy, and extra maple syrup was provided in a jug on the table. I'm not sure if an American would have considered the bacon crispy enough, but it was certainly crispy enough for me. The blueberries were ripe, but I'd expected there to be more than seven of them. I also wasn't keen on the icing sugar dusted all over the top; it added sweetness but no flavour, and the extra sweetness from this meant that I couldn't add as much maple syrup as I wanted to without making it too sweet.

Service was OK. Tap water arrived without me having to ask, in a repurposed wine bottle that was left on the table. A 12.5% service charge was added to the bill.

Accessibility: There are steps (with a handrail) to get in, but there's a small open lift at the side for step-free access. No steps to the toilets, which are reasonably spacious cubicles although with fairly heavy doors.