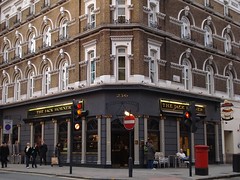 The long bar stretches around the centre of the space, with small partitions periodically breaking it up. Tables line the walls, with some booth seating at the front of the pub, some couches to the rear, and plenty of other tables for diners. On a Friday lunchtime in June 2009, the place was full, but with one or two small tables free (though Ewan's was sited under an unfortunate air-conditioning duct, less than pleasant on an already rainy early summer day), and on Kake's visit a year before, it was quite lively at 4pm on a Tuesday, but there were still a few free tables.

bob, Dean, and Kake visited on a Tuesday evening in March 2008. The beer was fine, but Dean's Diet Pepsi (£2.05/pint) was flat. The barman was notable for being a veritable whirl of activity - yet still friendly enough. There was background music but not too loud.

Kake visited again on a Tuesday afternoon in June 2008. My second pint of Pride was cloudy, but they replaced it immediately with no fuss at all. I get the impression that the staff will chat to you if you chat to them first, but they default to assuming you just want to get your beer with no fuss (which is perfectly sensible, given the location). Background music again (REM, Edie Brickell), but again not intrusively loud.

They serve food 11am-9pm daily (except Sunday, when service starts at noon), and a sign seen above the bar in June 2008 said that they serve breakfast on weekdays. Kake tried the garlic bread in June 2008 and was quite pleased; a generous portion, obviously freshly made, decent bits of garlic, nice bread, and good presentation including a properly-dressed salad in the middle of the plate photo. On a visit a year later, Ewan went for the chickpea, artichoke and sun-blushed tomato salad (£8.75) photo, which was attractively presented, with plenty of (not too oily) artichokes arranged around the edge of a full bowl of salad. The sheer crush of ingredients in the bowl (in addition to lettuce, tomato, cucumber and the above named ingredients, there were olives as well), may have overwhelmed some of the flavours, but it was still a fine salad.

Accesibility: The toilets are in the basement, but there's a disabled loo in the main part of the pub on the ground floor. At least a couple of the tables are that annoying kind that only short, thin people can get their legs under, so take a look before you choose where to sit.

Kake's verdict: One of the better choices for a pre-dinner meetup in the area, but not somewhere I'd specifically plan to spend time in; it's not unpleasant at all but due to the rapid turnover of custom there's just no real character to it.