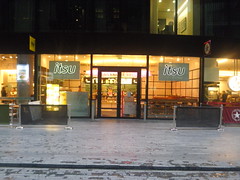 Sushi takeaway in More London near London Bridge. It is next door to Pod, SE1 2RT and a branch of Pret a Manger. As well as boxed sushi and salads it sells hot soup and frozen yoghurt. There are some tables inside and outside to eat but they are fast food style with a tray and bin to put your waste in - this is not an Itsu restaurant.

secretlondon has been here twice. The first time I had dynamite vegetable dumplings (£5) photo which was a large cardboard container of miso soup, vegetables, noodles and vegetable dumplings. Note that unless you ask all their soups are non-vegetarian as they have fish sauce in them. I also had a portion of frozen yoghurt. Despite their signage they do not do the chocolate topping here so I had fresh blueberries (£3) photo. It was all nice.

On my second visit I had slim salmon (£5), a box with sushi, salad and edamame beans in pods. It was fine but I'm not a sushi expert.