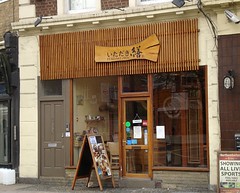 Vegan Japanese restaurant in King's Cross, opened in connection with the Japanese Academy of Agricultural Philosophy.

The ground floor features light wood and serene decor, seating around 20 or so at small square tables. There's more seating downstairs in the basement.

Kake has visited several times now, most recently in March 2018.

On a Thursday evening in March 2010 we'd booked but probably hadn't needed to, since there were free tables throughout our visit. Background music was playing quietly, including an Enya CD that came round twice. Service was very polite and anxious-to-please.

Miso soup (£2) had a rather thin and slightly sour flavour. Nigiri sushi (£8.50 for the eight-piece set) photo made use of some interesting and unusual toppings such as sliced okra, peeled red pepper, sliced beetroot, and a perfectly-prepared shiitake mushroom. For some reason, though, the rice was flavoured with salt only, rather than the seasoned vinegar which is more usual; we didn't think this worked particularly well.

Tempura (£7.80) photo showed a deft hand with the frying; it was light and not greasy at all. The vegetables within the batter — okra, baby sweetcorn, onion rings, sweet potato, and shredded carrot-and-onion — were cooked to a nice bite without being undercooked, though sadly one of the onion rings contained a tough piece of onion skin.

Ingen no goma-ae (green beans in sesame dressing; £3.40) photo was pleasing enough, though a touch more sesame flavour would have been welcome. Cubes of agedashi tofu (£5) photo were over-large, and maybe a little underseasoned; we could also have done without the hair we found in this dish (not from either of us), as well as the overcooked peas perched on top. Okara (a nutritious by-product of soya milk manufacture; £2.80) photo featured more overcooked peas, but was otherwise fine.

Chef's special pudding (£4) turned out to be a strawberry-based agar dessert with sweet aduki bean paste photo; this was quite tasty, if surprisingly unseasonal given the restaurant's emphasis on sustainability. Sake (£29/bottle) was Clearspring brand, with the Vegan Society's logo on the label to reassure those of said dietary persuasion.

On another visit by Kake and friend in May 2011, there were only a couple of other customers in when we arrived for a late lunch around 2pm. Quiet piano music was playing. They had no problem letting us order a starter when we arrived and the rest of our meal once we'd had a chance to work out whether our other friend would be joining us or not.

Spring rolls were nicely fried, hot and greaseless. Tempura was just one type, the grated-carrot-and-onion fritter that I liked last time, and it was again good. For mains we had a bento box each, which was varied and interesting, and a side order of hiyayakko (chilled tofu topped with grated ginger), which was nicely subtle and refreshing.

On another lunchtime visit in March 2018, the bento box (£10) photo was again varied and interesting; even the green salad was well thought out, with a nice mix of bitter and mild leaves and a delicious dressing. Sasou tea (bamboo leaf and buckwheat; £4/pot) was good, but a rather small serving for the price.

Kake's verdict: I enjoyed my lunch visits here more than my evening visit, and I'm not entirely sure why; perhaps it's simply because my evening visit was relatively soon after it first opened and the chefs have settled in a bit better now. The fact that everything is vegan is useful, and the prices are reasonable, so I'd come here again if I needed a quick bite to eat on my own in the area or if one of my vegan friends fancied Japanese food.

Accessibility: A large step to get in. Toilets are down a flight of stairs with a bend in the middle and no handrail for most of the way.